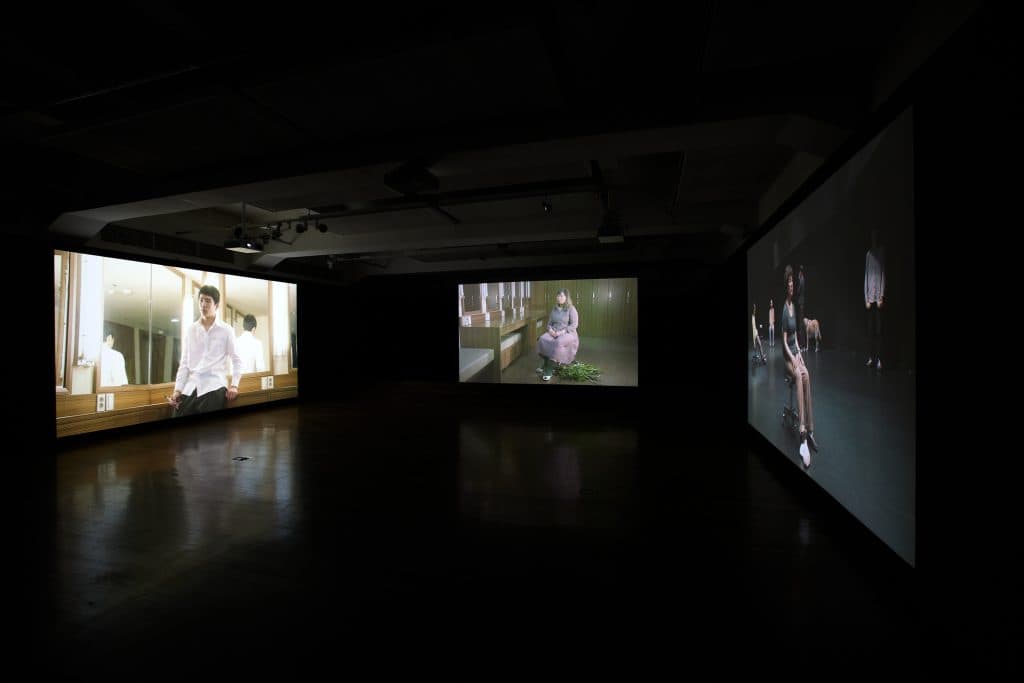 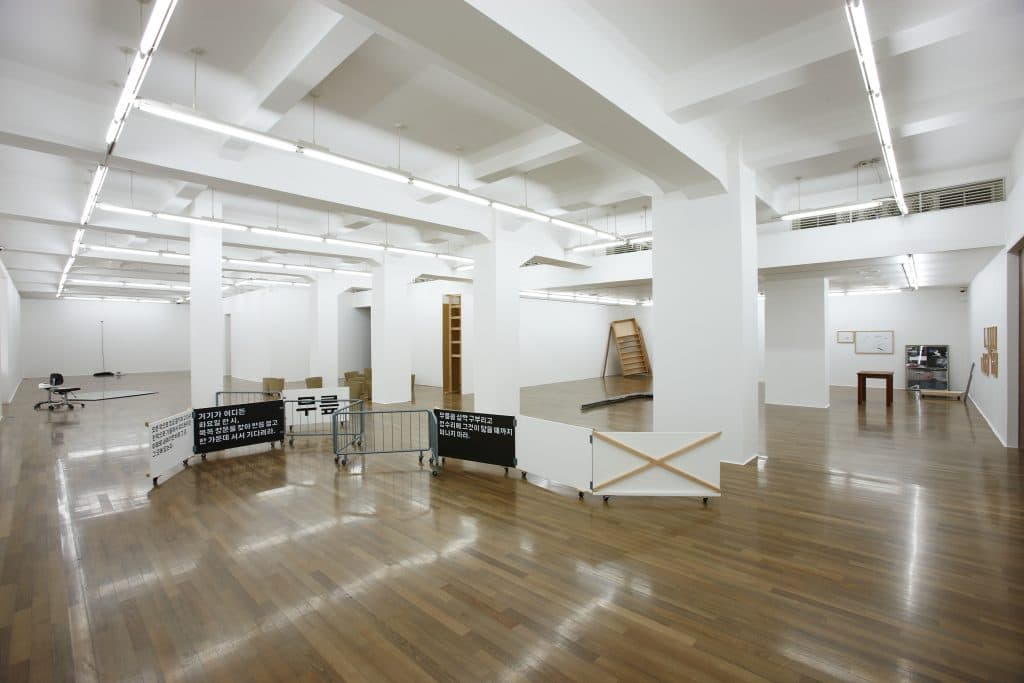 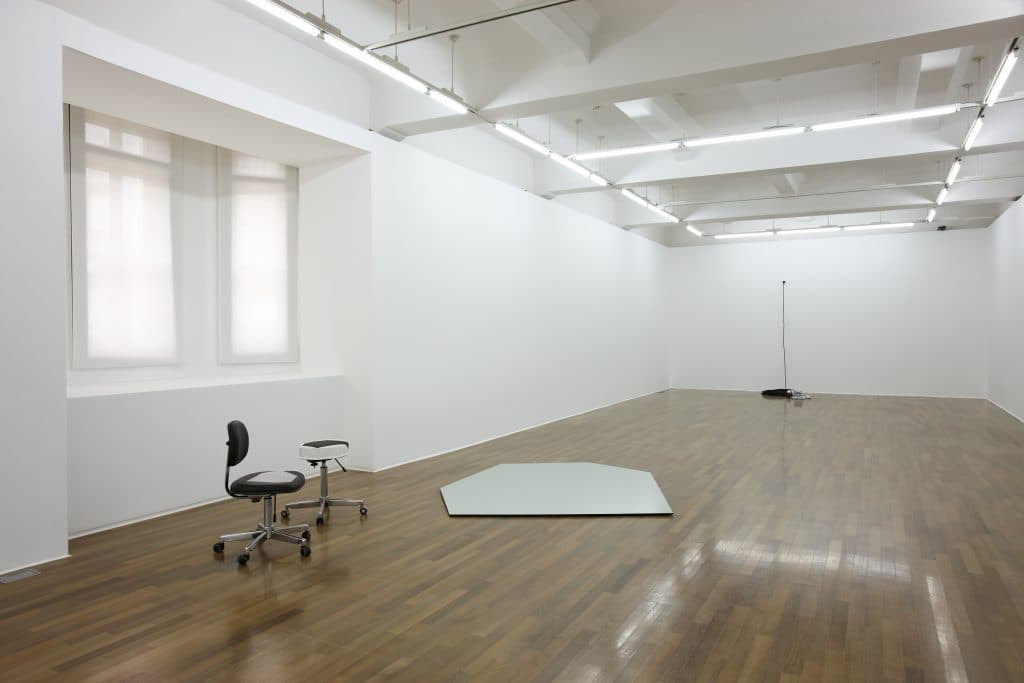 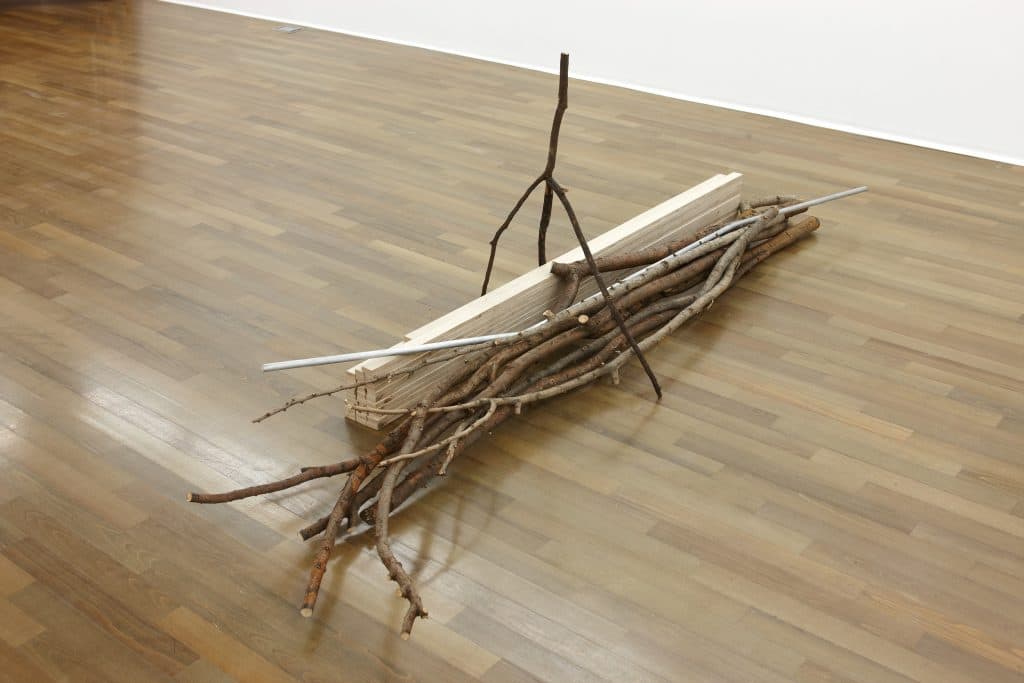 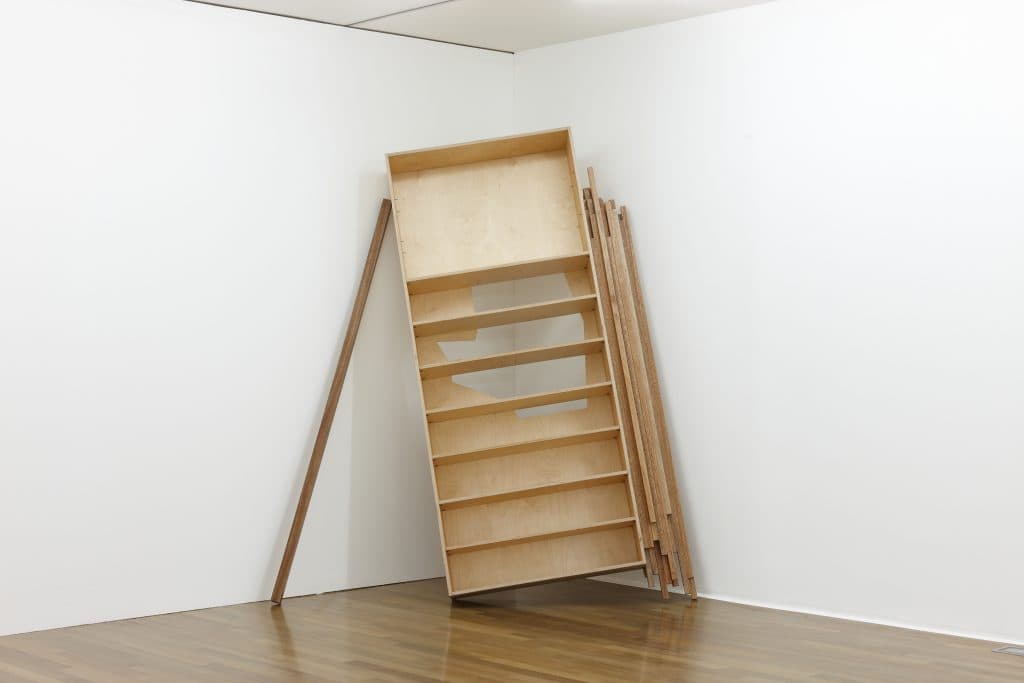 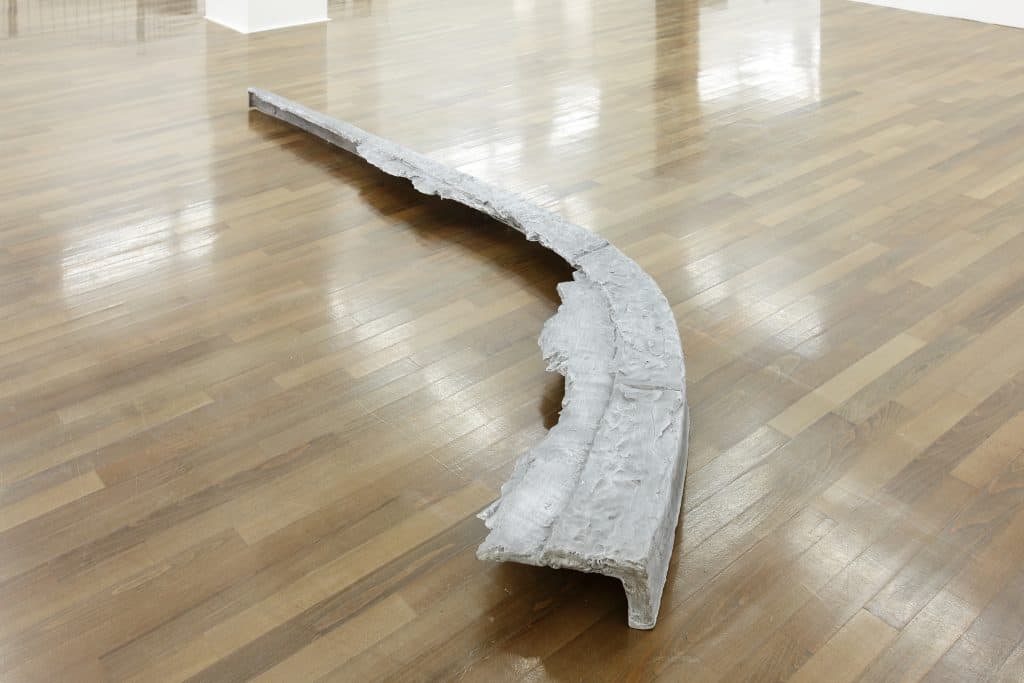 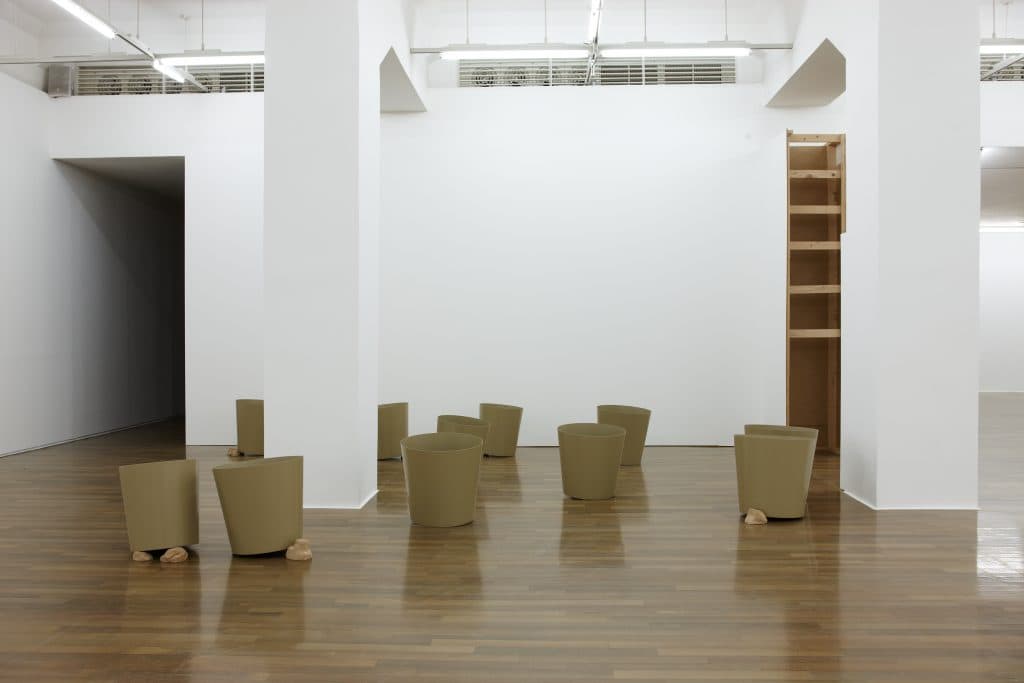 Ilmin Museum of Art now presents a solo exhibition of contemporary artist Chung Seoyoung, The Speed of the Large, the Small, and the Wide. Chung was at the forefront of the artists whose work truly began to show the symptoms of change in Korean contemporary art in the early 1990s, and she has been consistently working in varied genres including sculture, installation, drawing, and performance to create a body of work that reveals the underlying thought and reflection behind form. For this exhibition, the artist has attempted to overcome the limitations of sculpture through a body of work that raises the fundamental, epistemological question of what it means to create work as a sculptor. This is, one could say, the politics that Chung reveals through what is often considered a traditional genre; sculpture.

An Epistemological Approach to the Sculpture
In addition to sculpture, the artist also uses other genres and media to investigate and give form to the idea of a “sculptural dimension.” The 15 works featured in this exhibition include video installation, drawing, photo collage, and sound-based performance. One of the artist’s previous works, the performance The Adventure or Mr. Kim and Mr. Lee from a 2010 project at the LIG Arthall, will be reconstructed and installed as a three-channel film in the first floor exhibition hall. Though diverse, all of the questions investigated by these works present us with the artist’s ruminations on matters of sculpture. This is also what the exhibition’s title, The Speed of the Large, the Small, and the Wide implies. This is a vague phrase, through which it is difficult to clearly judge how large, small, or wide; or how fast or slow the speed; or indeed what kind of physical or imaginary motion is being described in the first place. However, we can understand that the phrase indicates a situation in which the physical dimension of some object or thing of a certain size and shape is moving, either slowly or quickly. Thinking about this in the context of the artist’s work, one might say that this is a situation implied by the speed of creatingㅡthat is, the situation and moments of bringing a sculpture into existence.

This exhibition is installed across the first and second floors of the museum. On the first floor, the three-channel video work The Adventure of Mr. Kim and Mr.Lee (2010-2012) investigates, from a sculptural perspective, the poses adopted by various figures. This piece-a film recording of what was originally staged as a performance-focuses on performers who had to maintain a single posture or action for two hours in an attempt to become a sculpture. The video captures the intimate time during which these people had to acquire the status of extraordinariness. She accomplishes this through the process by which she stages the performance: first, she invited inexperienced performers who had not internalized the conventions and clichés of trained stage or drama acting; she then bestowed them with long dyed hair, ballpoint pens to be twirled in the manner of young men, goblin-like ears, facial hair, disheveled hair, old baggy socks, and other details.

On the second floor is a display of the artist’s diverse sculptural objects, performance videos, photo collage, drawings, and other work. What a visitor first encounters on the right side of the entrance to the second floor is a photography and drawing series that features images of a man who balances, on his knee, a tower of clay. This piece is, in a sense, a key to this exhibition. The person featured in the photographs tried out several postures in an attempt to balance the tower of clay and prevent it from collapsing; these postures ultimately appear in the sculptural forms of the resulting photographs. One can see similar artistic strategies in two other works: Exercise (2013), a sculpture consisting of the relationship between a leaning bookcase and a stack of lumber; and the sound performance 2013, 4 o’clock (2013). Exercise presents a sculptural form that results from the balance maintained between a bookcase and a stack of lumber that lean against one another; in 2013, 4 o’clock, a performer’s grotesquely-postured body becomes a means for producing sharp sounds against the surface of a floor. These three pieces thus show the outcome of the process of balancing the tense relationships between sculptural forms and the outside world.

One may think of traditional sculpture as the act of constructing a three-dimensional representation based on an imagined image or form. But for Chung, the extension of the sculptural object is ultimately not modeled on a form but on the balance and tension between relationships, as well as the intimacy of the moments during which one investigates them; this is what we see in these works. Sculpting as a practice ultimately consists of drawing physical relationships and contemplating the inner temporality of the conditions and forms of objects; sculpture thus becomes a threshold from which we can recognize and discern the external appearance of the everyday. In Chung’s working process, the same object can be displayed many times in different exhibition spaces without becoming a museum object; the artist instead persistently pursues its possibilities as a performative object that lives an independent sculptural life. Her sculptural objects connect with their space and have a way of being that strongly affects the syntax of objects. Because of this, the artist’s exhibition space ultimately resembles a choreographic space that cannot be recreated. For this exhibition, the artist focused particularly closely on the qualities of the second-floor space, exposing a window that had been concealed in the middle of a wall or cutting away part of a temporary wall from the previous exhibition; she inserts her unique sculptural gestures into the space. She places a mirror such that is seizes on the sculptural aspects of the exhibition’s architectural space, revealing the structure and plasticity of the ceiling.

Unlike the genres of film or performance-which employs time, sound, and movement and whose nature is dynamic and immaterial, sculpture is by nature quiet and physical. However, there is another dimension of sculpture that challenges this “nature”; this dimension appears in the ontological time of sculpture, the moment of sculptural performance, and the process of cognizing the physical world of sculpture. It is in this dimension of sculpture that we find the duration of indecisive time involved in sorting through a sculpture’s small elements and details and considering the relationships among them. This is a spatial world imbued with an exciting tension that oscillates between tranquility and motility. The artist pursues these sculptural dimensions with performance, sound installation, text drawing, photo collage, and other media. Through this, she more closely reflects on herself and avoids the pitfalls of mannerism; and while her practice operates on a fundamental level, she pursues free sculptural thought and overcomes the limitations of her sculptures’ physicality. Chung’s new and recent worksㅡwhich reason through the world of sculpture without confining themselves to one genre or medium and display their own unique aesthetic realityㅡreveal her conviction as a sculptor. This exhibition shows works that think through the problems of sculpture while also showing the artist’s own circular, meta-reasoning about the realm of sculpture and her unceasing time of struggling with these issues. Seoyoung Chung’s works offers a serious chance for the viewer to recognize the otherwise traditional genre of sculpture in a context of absolute contemporaneity.